By now we have photographed the majority of famous waterfalls of the world: Angel Falls in Venezuela, Victoria Falls, located on the border of Zambia and Zimbabwe, as well as Iguazu Falls in Brazil and Argentina. Today we'll bring you our virtual tour over Niagara Falls.

We have already made an attempt to shoot Niagara Falls from a regular helicopter but we failed. Unfortunately, our pilot refused to fly to the waterfall closer than a few kilometers despite of our approved flight plan. And now, thanks to our colleague Nick Ivanov from Canada, we have a chance to show you Niagara Falls from a close range.

Here are a few facts about Niagara Falls.

At the place where North American Niagara River separates two of the Great Lakes, Erie and Ontario, nature created a magnificent cascade of waterfalls. Each waterfall has its own name: the Horseshoe Falls, the American Falls, and the Bridal Veil Falls. However all of them are known under one name — Niagara Falls. This is the most important landmark of the USA and Canada at the same time, as it separates one country from another.

Great Lakes of North America, Niagara River, and its waterfalls are results of shifting of an ice shield that moved down from the Eastern Canada territory over ten thousand years ago. The glacier crashed everything on its way, deepening and widening riverbeds, and creating or eliminating lakes.

Interestingly enough, the geological characteristics of the area are such that the layers of soil are still moving, even if their movement is not as dramatic any more. During past centuries Niagara Falls have moved eleven kilometers south. According to scientists, the waterfall has been moving with the average speed of one, one and a half meters per year during last 560 years. Today special engineering efforts managed to slow the shifting a little bit.

On the international scale Niagara Falls is not that high — just 53 meters. Here are few numbers for comparison: Angel Falls in Venezuela drops its water from 807 meters, and Victoria Falls in Zambia and Zimbabwe is 108 meters high. However the width of Niagara Falls is 792 meters. This fact places it together with the widest waterfalls in the world (comparing with Angel and Victoria — 107 and 1800 meters respectively).

These numbers demonstrate how different a waterfall can be. Every one of them is unique. It is also true for the waterfalls that form the Niagara Falls complex.

A small island called Luna separates the American Falls and the Bridal Veil Falls (that truly looks like a bridal wear). Their combined width is about 335 meters. At the same time, there is a giant pile of large sharp rocks at the foot of the American Falls, which makes a visible part of the waterfall 21 meter high.

Named after deceased herd of artiodactyls, Goat Island is a popular tourist destination as it offers an opportunity to enjoy a spectacular view and also to take pictures of Niagara Falls. Little bridges connect the island with the US mainland and neighboring Luna Island. The Cavern of The Winds, another Niagara attraction, is also located here. From inside the cavern, one can admire the waterfall up close and also feel the power and presence of the big water. And when we say "power" we really mean it — drops of water shower you from head to toe! This is why each tourist receives a raincoat and waterproof footwear at the entrance to the cavern.

Niagara Falls attracts not only millions of tourists, but also those who want to experience extreme sensations. In 1829 Sam Patch became famous as a first man, who jumped from the Horseshoe Falls and survived. Another so-called record was set in 1901 by a 63-year-old Annie Taylor, who went over the waterfall in a barrel. The event of 1960 is rightfully called "The Miracle of Niagara", as a 7-year-old boy accidentally fell down the Horseshoe Falls and survived. Unfortunately, raging waters of Niagara Falls also took many human lives...

Location and position of Niagara Falls doesn't allow a group view of all the waterfalls from one spot. Some people believe that the most spectacular view opens from the Canadian shore; those who travel to Niagara Falls on American side are also satisfied with the picture. And now you have an opportunity to enjoy the magnificent panorama of all waterfalls from the widest possible angle — a bird's eye view — without a risk of getting wet or falling down the stream. 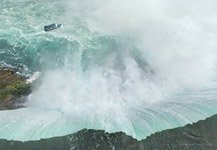 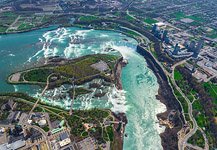 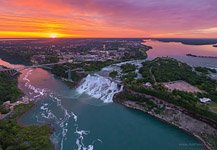 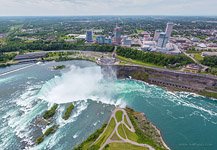 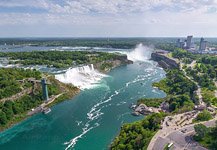 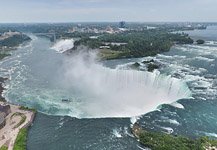 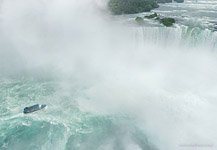 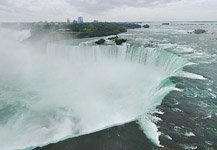 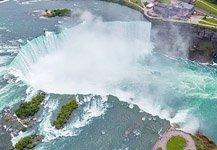 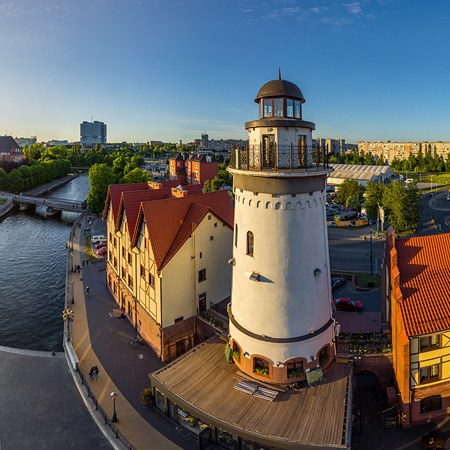 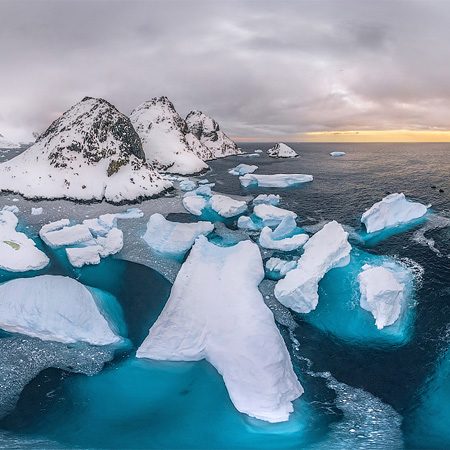 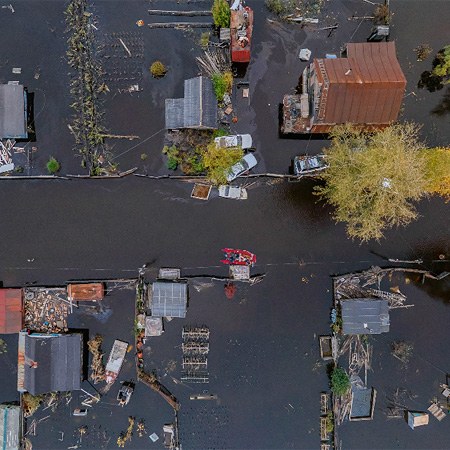 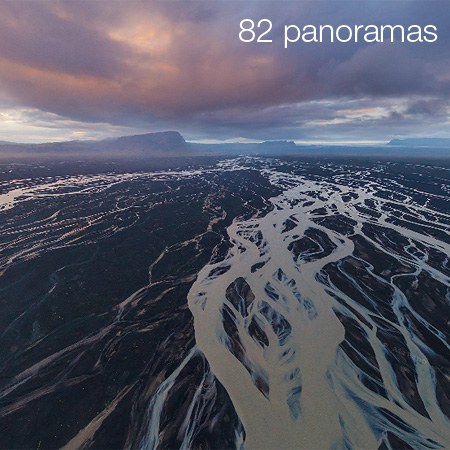 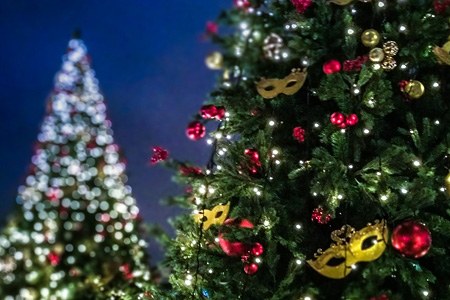 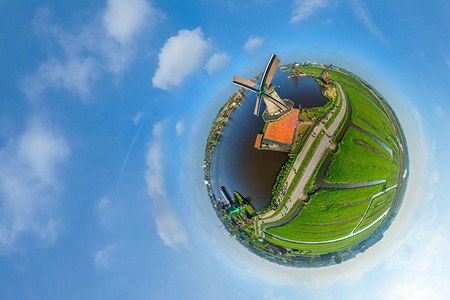 Hello,I am,now 69 years hold, and I was in Niagara Falls with 9. Funny that I remenber very well my visit. But one thing is missing here: the view from inside where we could see the water folling ahead of us. Women wear yellow boots, hat and raincoat and man wear in blak. I just love it. F#225tima Valadares

Greetings from Colorado! I'm bored to tears at work so I decided to browse your blog on my iphone during lunch break. I really like the knowledge you present here and can't wait to take a look when I get home. I'm amazed at how fast your blog loaded on my mobile .. I'm not even using WIFI, just 3G .. Anyhow, wonderful blog!

Beautiful presentations that let me visit places that I'll never get to go to... Thanks.

Now you know why so many lovers have been choosing this destination for their wedding trip so did my parents,... 62 years ago!

Breathtaking views of many places all over the world. I will watch many more times.

My maternal grandparents lived in Niagara Falls, N.Y. Over 60 years Ive visited often, Summer and Winter. Never have I seen the whole view. Amazing. Thank you.

Video is beautiful, and the pictures too. I love this.

Pl modify your ratting no.s,
I want to give no 9 as I have seen it for 3 days in full sunshine and 2 night in full moon.
Great.

By the grace of GOD I get an opportunity to visit Niagara Falls on 06-07-2014 to 06-09-2014. But now I see this panorama. Such a great work in this panorama.. I get more interest in get your mails. What I'm seeing in Niagara in my vision, all things are in your panorama with out missing. This is remain me that gold days. Thanks.

Just magnificent! The power, creation and beauty of nature last for ever!!

I am 72 have lived 12 miles from Niagara Falls, I see it every couple of weeks and still marvel at the majesty of it. Thank you for showing the beauty of it to the rest of the world. Fantastic photography!

I am a guide at Niagara Falls and I can say that these images are among the best I have ever seen!

I love your panorama, but wondered how come I do not get them any more? Pls continue to send them to me.

What a beautiful show! Congratulations to you for this magnificent result.

The Niagara Falls are beautiful to see in any season. I have been lucky to see them in winter and summer. They rate second only to Iguassu Falls on the Spectacular Range. The background music is a perfect choice!

it is great,please put a picture from Tabriz

It is very great!

A line drawn from American Falls through Horseshoe falls would point roughly Southwest. Your photo labeled "Sunset" therefore must in fact be a sunrise.

I'm impressed!!!!! great job greet and wish you many successes

It is beautiful.I was there twice, a few years ago and now.Thanks

Amazing view! Absolutely stunning picture! Thank you so much.

You brought one of my "dreams" come true....as a child it was always my hope that I would see this spectacular view of Niagara Falls..Your panorama has fulfilled that dream with that childhood hope. It has captured everything that I have hoped for...thank you .. it was worth the 80 some years that I had hoped for..

*****CONGRATULATIONS, EXCELLENT WORK!!! a picture with out equal!!! (... It would appear that I'm in the helicopter, THANK YOU VERY MUCH!!!)

It is good to review this beautifull landscape.
Thank you very mutch for such beness.
Work well done

Hello,thank you for the excellent presentation of beautiful pictures of Niagara Falls, your team again did a great job, thanks again.

What a magnificent breathtaking panorama !
Anyone viewing it will surely be reminded of God's wonderful creation! We are very grateful to you.

Its absolutely amazing and beautiful. Its fantastic. Congratulations and thanks for sharing.

Its absolutely amazing, mind blowing and fantastic. Once I felt i was there in real. The scenery itself is Beautiful and more than that you people have captured from such amazing angles that i actually don't have words to describe that. I really appreciate your efforts. That's really awesome and magnificent job. THANKS for sharing :-) Love this web.

Classic! Its beautiful!!
Its looks real as I am there ::))
Spashiba balshoi...
Good works done droog.

i have not comments


Thank you, Aniketh! We're glad to see you on our website!

Congratulations,Magnificent,We enjoyed it very mutch Thanks for this amazing work

This is one of the best and most beautiful panoramas that you guys have done ever. It is amazing and magnificent. The sunset is gorgeous. This is soul food. Thank you for sharing this.


Dear Marco, thank you for your kind words about our panoramas!