The decision of visiting Ingushetia turned out to be rather spontaneous. We packed quickly, left Moscow and headed southwards.The route was familiar to us, without any surprises, and by the end of the second day, we had reached Magas. But there were no vacant rooms in hotels because of the Russian Fighting Championship taking place in the Palace of Sports.

On our arrival, we were greeted by Hussein Kozdoev, Ingush Light Aviation Federation President. Our visit coincided with the aviation gathering in Magas, so we intended to take part in this event, or at least to take pictures of it. Hussein invited us to the house, we had supper, watched the championship live broadcast, discussed our plans and then went to the monument of glory and memory. The southern night falls quickly, so it was already dark, but the illumination was turned on especially for us. The heart of the composition is the nine watchtowers that symbolize the number of nations deported from here in the 1940s. We captured the memorial from above and from the ground. 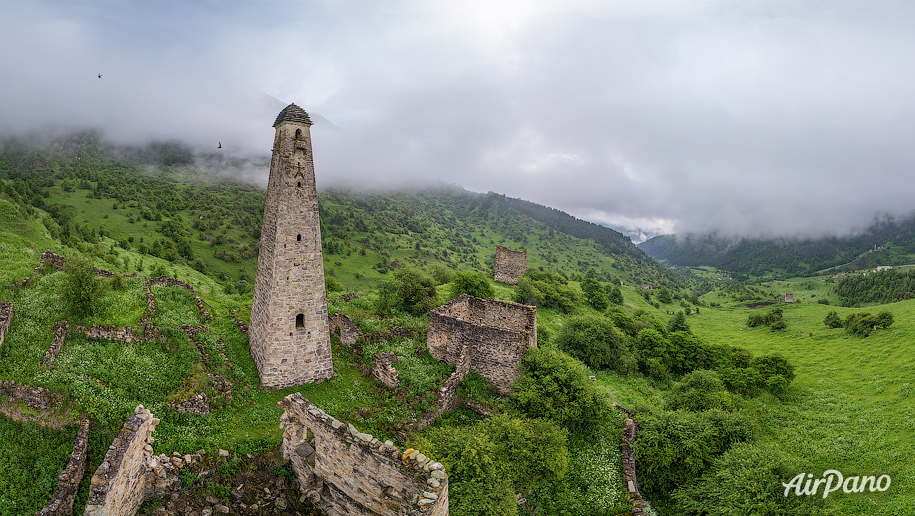 It was around midnight, and though Hussein warmly invited us to stay in his house, we chose to sleep in another place. We were taken to the sports camp in the mountains. The fast river, cicada noise and talks of fighters that came back after competitions could be heard in the darkness.

In the morning Hussein came here to take us further into the mountains. The road was getting thinner and thinner, the cliffs were rising on the sides. Then the border post appeared before us. The guards checked our documents and soon their strict faces gave way to smiles. Stories about abreks, blood feud and tamed bears began. Perhaps, these guys could be perfect guides! But we had to continue our journey. 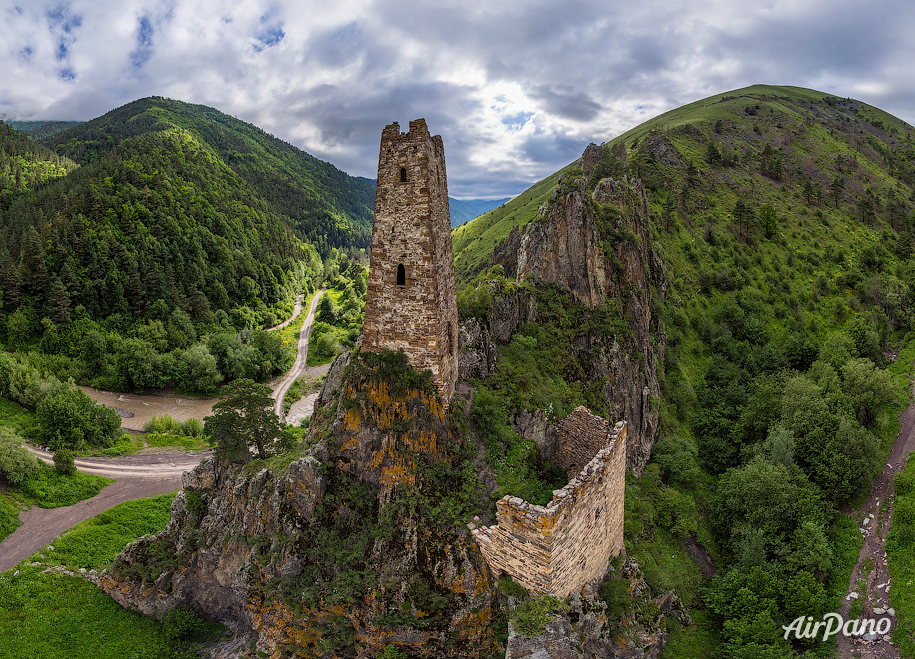 We reached the ancient settlement of Targim. The mountains are more impressive here and the first tower complexes appeared before us. Across the river, there are the towers of Targim, and further away there are the reconstructed Khamkhi towers and the constructions of Egikal complex. But we had a long way to go.

Our cars followed the curves of the road and soon we found ourselves in a cloud. The visibility was around 20 meters. On another turn, we stopped to watch a tower together with stone vaults. They were thoroughly destroyed, but there were bones and skulls still lying in the vault. In the past, people used to come here when they were infected with different diseases during the epidemics in order not to contaminate others. The food and water were given to them through a small window using long poles. In case people recovered, they returned to the settlement. If not, they stayed here forever. 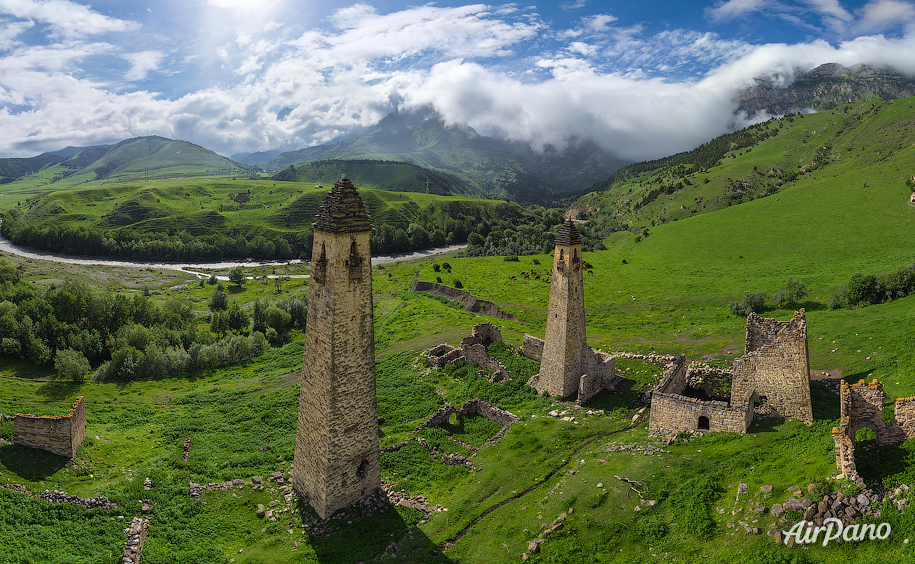 According to ancient beliefs, the afterlife is the resumption of our earthly lives, with the difference that the sun shines for the dead in the night. There is a saying that "During the life, the man needs a tower, in the afterlife he needs a vault", and it reflects the attitude of the ancient Ingushes towards life and death. These traditions changed only at the beginning of the 20th century with the adoption of Islam.

The pass offers a beautiful view of the Caucasus mountains, but we could see only the grey clouds carried with the wind. As we left the pass behind us and descended into the valley, we came to Armkhi, a beautiful resort.

Although the tower complex of Erzi is the nearest one and can be seen from the roadside, it is difficult to get there. At first, we tried to get there on foot, but soon we were out of breath and understood that it would be too challenging to walk up there with our equipment. The following day we decided to make this way using a car. It threw the stones back, the tires were losing traction and squeaked, but still, we were pushing forward. Soon the road was interrupted by a gate with a barbed wire so that horses and flocks of sheep could not enter the territory of hay fields. I went out, opened the gate and we rode inside. 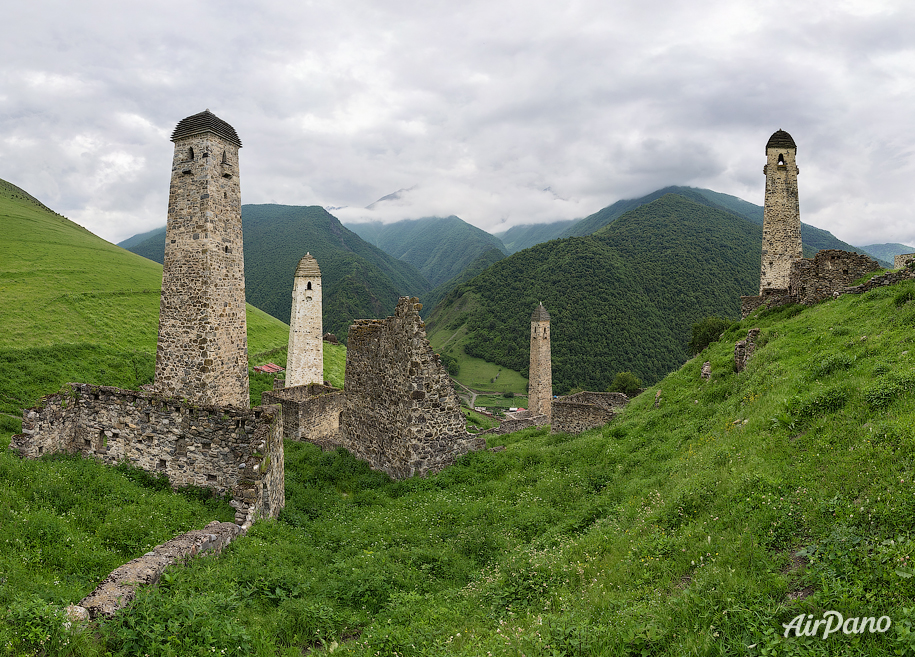 After the Ingush deportation, many towers were destroyed, but some of them are restored now. In one of the towers, we accidentally met a man who spent the night there: Alexey was travelling through the territory of Caucasus, sleeping in a tent or under different shelters. He offered us a cup of a mountain herbs tea, we had a talk and enjoyed the scene.

One of the most popular places of Ingushetia is the medieval tower complex of Vovnushki that used to be a watching and defensive construction. In 2008 it reached the final tour in the Seven Wonders of Russia competition. Two fortifying towers that stand on both sides of the valley look truly magnificent. The river Guloykhi flows nearby. At times border patrols can be met — it's a frontier zone, after all. 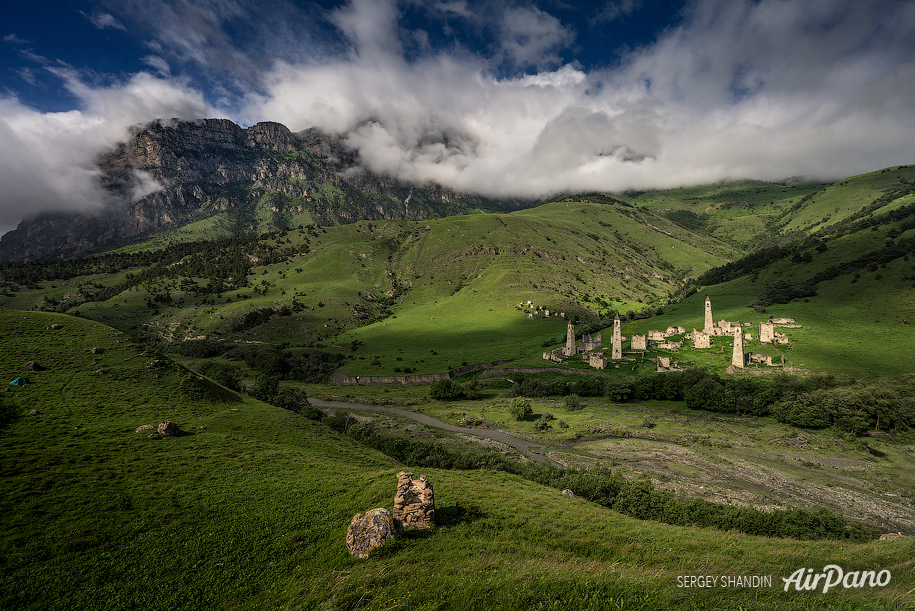 Lots of legends are related to these towers. According to one of them, during the siege one of the towers was set on fire and a Nakh woman saved little babies: she walked on a rope and carried them in a basket.

The tower complexes can fascinate with their ancient beauty: you feel like you are in a legend, and if a dragon flies over the mountain ridge, no one will ever wonder. It should be also noticed that all the towers were built in just one year, and in case the construction was not finished in time, then the tower was taken to pieces.

The unique feature of Ingushetia is the dense concentration of wonderful natural places and historical sights in this area. Ancient temples, defensive towers, snowy peaks and mountain rivers, caves that served as shelters for robbers not so long ago — all these points are located within dozens of kilometres. Our expedition took place at the moment of Uraza fasting so that we could hardly meet other tourists on our way, and this fact enhanced the beauty of this place.

The trip to Ingushetia is not just a travel through the territory, but it's a time journey as well. Mountains and towers are the guards of the history, and we also tried to reflect the pieces of this history through our 360 photos and video. 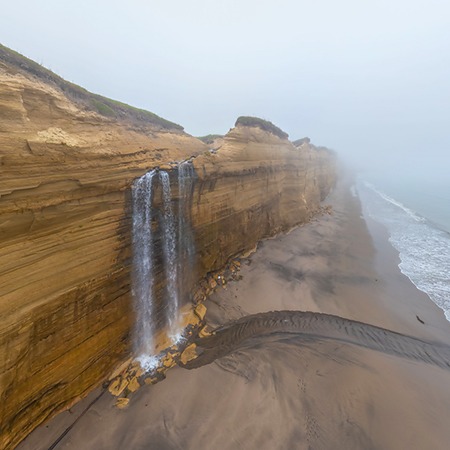 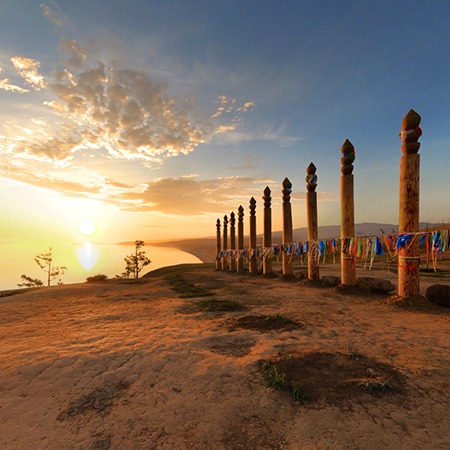 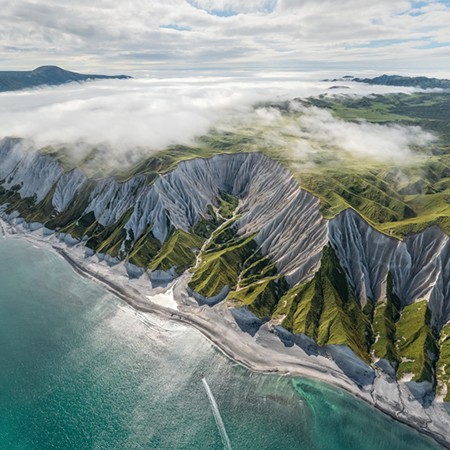 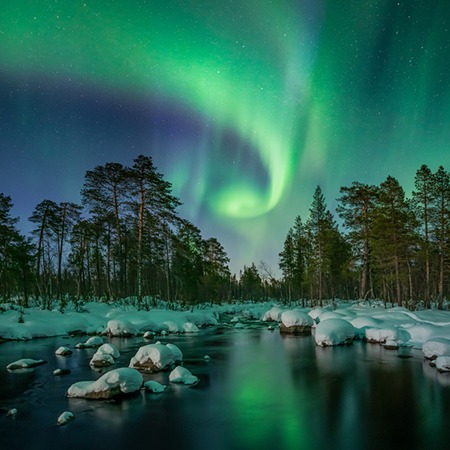 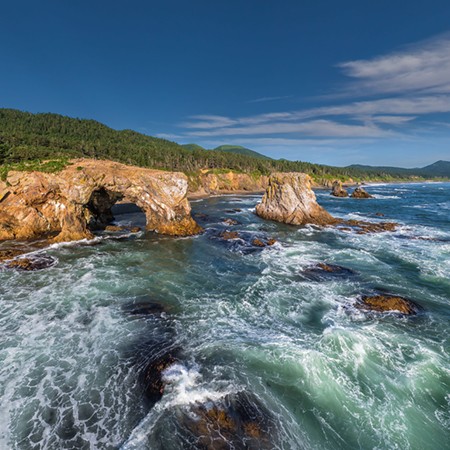 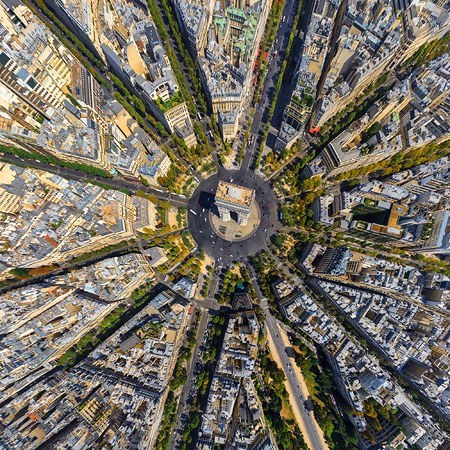 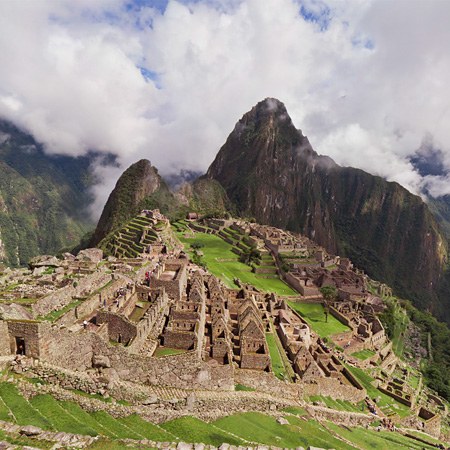 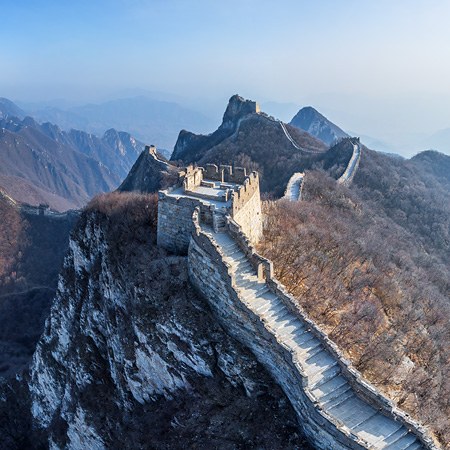 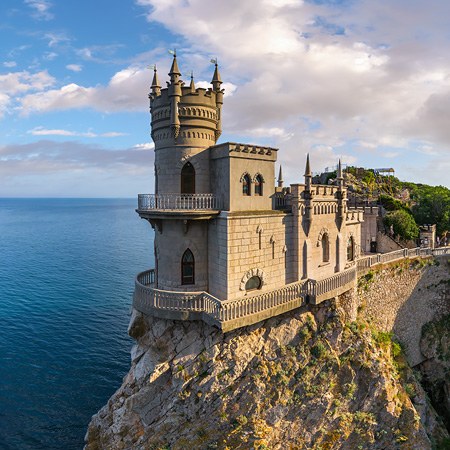 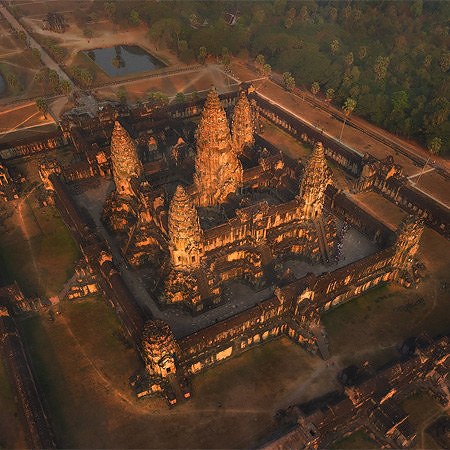 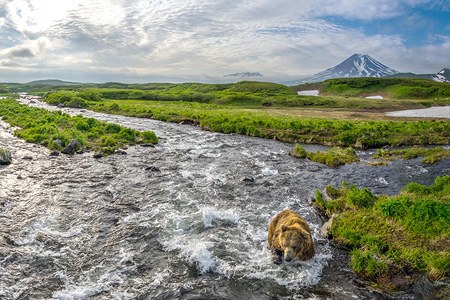 
Nice and interesting video, thank you