Today we show you the marvellous night panorama of Las Vegas, made by our colleague Aleksandr Reznik.

Las Vegas is one of the most famous cities in the USA. The name itself became a rather common name, symbolizing gambling business in general with its soaring rises and falls. It is a "Sin City" and a "Disneyland" for adults; City-Enigma having a very contradictory history. Just take the name alone! Las Vegas is Spanish for "water meadows", at the same time the name of the state, where the city is situated — Nevada — can be translated as "snow-covered". How one could imagine these things being in the middle of the white-hot desert?

The city started its chronicles in 1905. At that time gambling games were quite widespread in the USA; Las Vegas was not an exception. By the way, the prizes given by the first playing machines were in tangible equivalent: lucky men were given cigars or spirits instead of money. 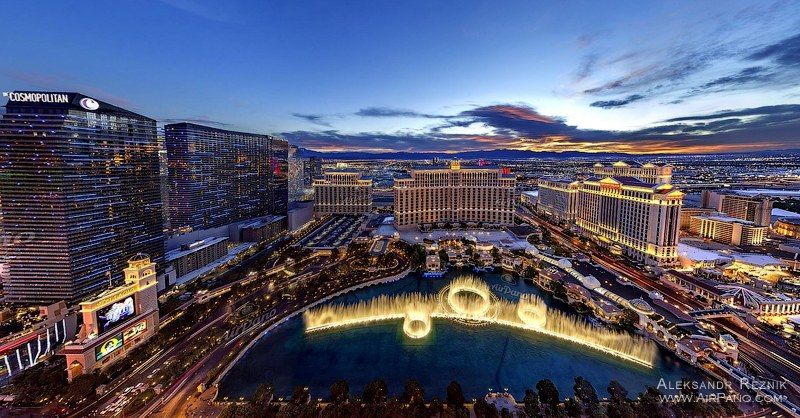 By the 1930s the government had decided to restrict the gaming industry. However, meanwhile many casinos were being closed down throughout the country, the Nevada state managed to legalise the industry of gamble; a lot of large casino-clubs began to appear.

This genius project of budget replenishment was suggested by a certain respectable Mr. Tobin, who had never gambled himself. "Imaging, how many schools can be build with this money", he said. That was a rather convincing argument.

But in reality Las Vegas never contributed to the history of the U.S. educational system. Instead of that the city is strongly associated with the notion of sin. For example, it is the place where the "porn-Oscar" AVN Award is organised. At the same time, Las Vegas is the only place in the Nevada state where prostitution is strongly prohibited.

In the 50s-60s there was one more sight in Las Vegas. 100km away from the city there was the Nevada Test Site where nuclear testings took place. City residents and visitors were able to witness the mushroom clouds even from the hotel windows. 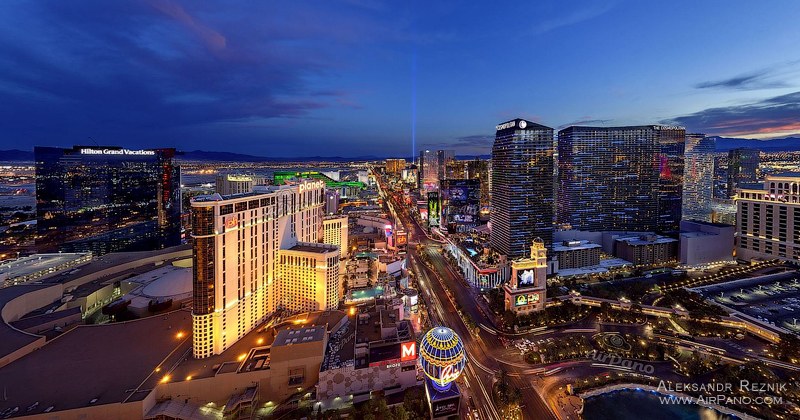 Nowadays some other sights, not the less spectacular, are here to admire. These are, for example, the world famous Bellagio fountains: more than 1000 devices filled with water create amazing water-dancing show to either classical or modern music. One more quite popular attraction of Las Vegas is the Volcano which usually ‘erupts' in front of the Mirage Hotel. There is a real crater boiling and disgorging lava and fire at night. Actually, one can find attractions all around the city, the only thing you have to do is to find enough time to see them all.

The heart of the city is the Las Vegas Strip known for its concentration of hotels, each of which tries to catch the eye  not only by neon lights, but also by a unique show. Those who want to sink in second childhood will be impressed by the Disney Castle by MGM Grand; the amateurs of classics will like the copy of Eiffel tower, and etc. But the truth is that the Las Vegas Strip has changed significantly over the previous years: modern hotels have appeared; they may not be masterpieces of architecture, but their enormous size and might can prove: yes, this is Las Vegas, baby. Here the battle is for the strongest.

Splashes of a million lights tempting a wanderer and pulling him in its cobweb; grandeur and might and... shine again — that's the appearance of the famous "city that never sleeps".