Hospitable Greeks helped us organize our trip to Athens. We are very grateful to Yiannis Yiannakakis, head of Athens Walking Tours travel agency. In response to our "cry for help" in obtaining photography permits, he and his colleagues not only offered support in this tricky business and secured official permits for all requested locations, he also helped us with accommodations, transportation, and logistics, absorbing considerable portion of our expenses. Traveling the world, we have never met such generous hosts before.

Being one of the oldest cities in the world Athens was first mentioned in 15th century BC. Athens is called the "cradle of civilization" — it's the birthplace of democracy, western philosophy, political science, literature, theater, and the Olympics.

Athens is the land of Gods. According to ancient Greeks' beliefs, the city was a battleground where Athena, goddess of wisdom, fought with Poseidon, lord of seas. Athena emerged victorious and the city was named after her. However, offended Poseidon had his revenge by making the area waterless. Of course, this story is only one of many great ancient Greek myths, but the fact remains that water shortages plague the city to this very day. Moreover, hot Athens weather, probably, makes Greeks wish for a different outcome of the legendary battle. 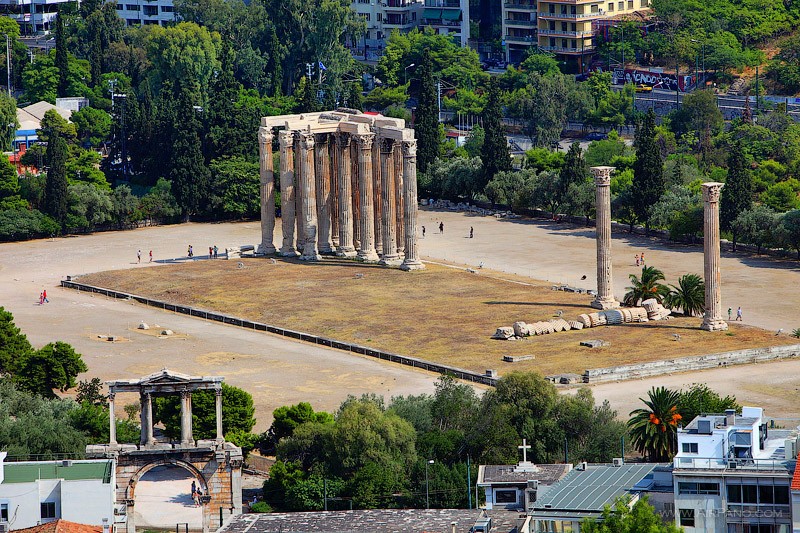 For centuries Athens has been an important cultural center and a large powerful city. Many Athens landmarks have survived to this day, and the most famous of them, without a doubt, is the Acropolis. Actually, the word "acropolis" simply means "upper city" or "a high place" — such places were used to build temples for patron deity and could be found in almost any Greek settlement. But it was the Acropolis of Athens that became the famous landmark of the world and a symbol of Greece, just like the Eiffel Tower in Paris or the Kremlin in Moscow. 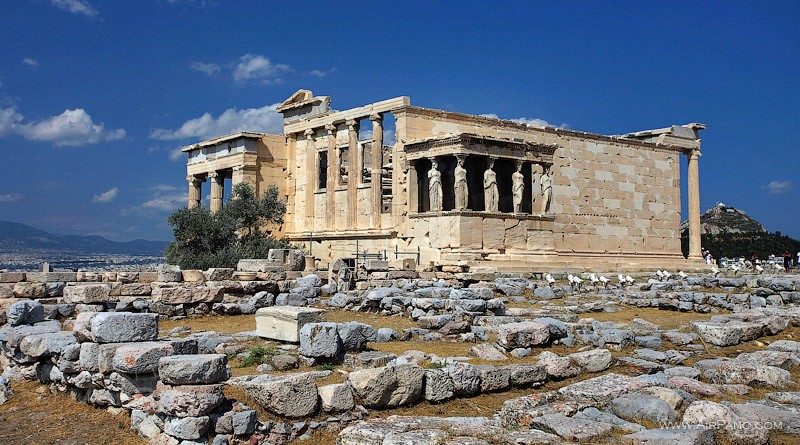 In ancient times (650 — 480 BC) numerous temples and sculptures of Greek deities were located here on a 300x130 meters rocky spur. Later, during the Mycenaean period (15-18th century BC) the Acropolis served as a fortified royal residence. Temples were built during peacetime or destroyed if the city was at war.

The most outstanding contribution to the appearance of the Acropolis was made in 447 — 438 BC by Ictinus and Callicrates, architects who built the Parthenon, a giant temple in honor of the patron deity of these lands — the virgin goddess Athena Parthenos. Despite the fact that the Parthenon is in a rather poor condition, its facade with columns is the most famous landmark of Greece. 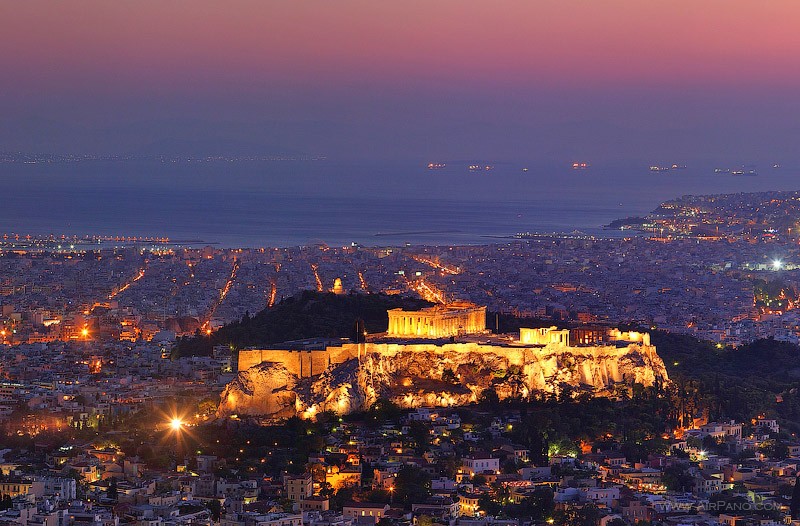 The Parthenon's meticulous design, thought out right to the smallest details, which are completely invisible to the outside observer, creates an interesting optical illusion. The temple seems perfectly rectilinear, but in fact its contours don't have any straight lines. For example, the corner columns are not circular in the cross-section and thicker than others in the diameter. Otherwise they would seem thinner, but thanks to this technique all columns visually look the same.

There has always been a struggle for the Acropolis during the centuries of its existence. When Christianity came to Greece the Parthenon was converted into a Christian church of Virgin Mary, and the statue of Athena Parthenos was moved to Constantinople. In the 15th century, after the conquest of Greece by the Turks, the church was turned into a mosque with attached minarets, and one of the temples of the Acropolis, the Erechtheion, served as harem for the Turkish pasha.

In the 17th century the entire central part of the Parthenon was destroyed by a cannonball shot from a Venetian ship. After that persistent Venetians broke several sculptures while trying to remove them. In the beginning of 19th century Thomas Bruce, 7th Earl of Elgin, took everything that was possible to take: from friezes to caryatids (and Greece is still trying to persuade Britain to return the monuments back to where they belong). In addition to that Turks were constantly sapping the Acropolis in order to blow it up. They did not succeed, but during one of the ensuing battles Turkish cannonball heavily damaged the Erechtheion temple. 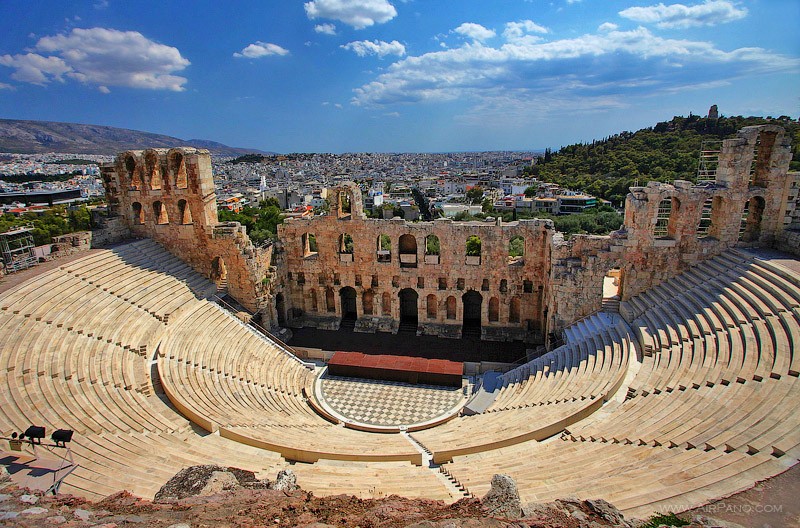 Only at the end of the 19th century the Acropolis finally saw some peace (with the exception of museum staff strikes). Its ancient appearance was restored where possible, some of its original bas-reliefs and sculptures are now in museums of London, Paris and Athens, and those sculptures that we see outdoor nowadays are copies. 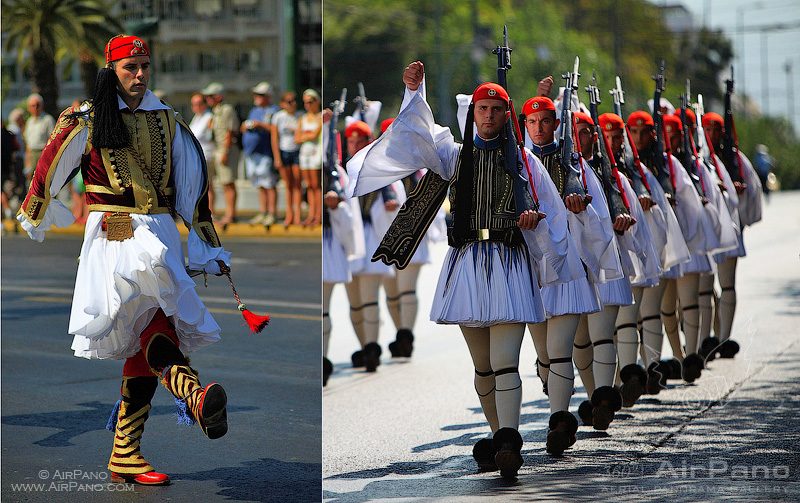 Of course, it would be a mistake to suggest that the Acropolis and the Parthenon are the only Athens landmarks. A city with such a long and legendary history has preserved a lot of individual monuments, buildings, and entire neighborhoods. Historic areas of Agora and Plaka, Syntagma and Omonia Square, the Cathedral of Athens, the National Garden of Athens, and much more! We would like to show you these spectacular panoramas of ancient Athens from a bird's eye view!